The Floating Island at Qingyun Peak

The small Floating Island at Qingyun Peak is one of the highest points in the game which is one of the best places to take pictures in Genshin Impact due to its location of having a fantastic view above the mountains where the you can see the fog engulf the terrain and where the sky is clear in sight. Whether its day or night both are beautiful, an island made by the Cloud retainer at an unknown time of the past.

Anywhere in Liyue can be an ideal photo spot for anybody, it’s just a matter of creativity. Liyue is one of the best places to take pictures in Genshin Impact due to its design and overall architecture that Liyue represent to its real life counterpart which is China where traditions of their culture has a lot to offer in being a screenshot worthy place. Even the most simplistic of places can be a nice area for a quick snap.

Now the Terraced Fields in Qingce Village could be one of the best places to take pictures in Genshin Impact as it represents that Asian Culture. The vibrant colors is something that you can’t ignore as it compliments the sunset or sunrise really well making things contrast and vibrant in colors.

The view point at the cliff of Cape Oath is another spectacular sight to experience that makes it one of the best places to take pictures in Genshin Impact. Having the View of monstadt and Dragonspine mountain from afar complimented with lovely sunset is eye-catching for anyone to snap a photo.

Want another spectacular mountainous view point? Try out Guili Plains, right after the teleporter just climb up in where there should be a sitting place on the highest point. Guili Plains gives you an awesome view point of Dragonspire mountain and Guyun Stone Forest with the awesome sunrise in the distance.

Barbatos Status is a common place for most players, either to have a photo taking session or sitting there to Wish for 5 characters. The sitting place at Barbatos hands is one of the best places to take pictures in Genshin Impact with your friends.

There are a lot of places to take a photo of the Moon and Starsnatch Cliff is no exception. It’s a pretty view point of the sea but it can also be great for taking Night photos. Take this photo for an example during a Hangout Event questline which I took this opportunity to snap a romantic screenshot of the two Mondstadt NPCs.

Lingju Pass is one of the locations in Genshin Impact that contains remnants of ruins from the old era. Gameplay wise it also has a lot of puzzles to solve for the player. It’s one of the places that has beautiful waterflows in the area and contains a lonely Golden Tree among its terrain. A nice place to explore and find a screenshot worthy position for your characters.

There’s a location by the West of Mondstadt and North of Wuwang Hill where the Oceanlid Boss resides in. There will be a small enclosure of waterfalls and a lake surrounded by mountainous terrain. If you love waterfalls then this area contains one of the best looking ones and it’s a natural beauty representing what Genshin Impact open world exploration has to offer.

Again, the best places are subjective, but these are one of the many locations that Genshin Impact World contains for the player. If you have a better location in mind, drop a comment and a screenshot about your favorite place in Genshin Impact for taking pictures.

Writing about Anime is pretty fun.

The way down from the Grand Narukami Shrine is also exceptional. I’ve taken some nice photos there around sunset. 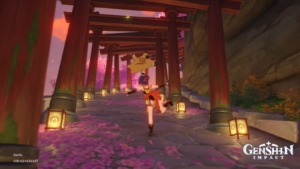 Do you mind answering this poll?

This website uses cookies to improve your experience while you navigate through the website. Out of these, the cookies that are categorized as necessary are stored on your browser as they are essential for the working of basic functionalities of the website. We also use third-party cookies that help us analyze and understand how you use this website. These cookies will be stored in your browser only with your consent. You also have the option to opt-out of these cookies. But opting out of some of these cookies may affect your browsing experience.
Necessary Always Enabled
Necessary cookies are absolutely essential for the website to function properly. These cookies ensure basic functionalities and security features of the website, anonymously.
Functional
Functional cookies help to perform certain functionalities like sharing the content of the website on social media platforms, collect feedbacks, and other third-party features.
Performance
Performance cookies are used to understand and analyze the key performance indexes of the website which helps in delivering a better user experience for the visitors.
Analytics
Analytical cookies are used to understand how visitors interact with the website. These cookies help provide information on metrics the number of visitors, bounce rate, traffic source, etc.
Advertisement
Advertisement cookies are used to provide visitors with relevant ads and marketing campaigns. These cookies track visitors across websites and collect information to provide customized ads.
Others
Other uncategorized cookies are those that are being analyzed and have not been classified into a category as yet.
SAVE & ACCEPT
Powered by